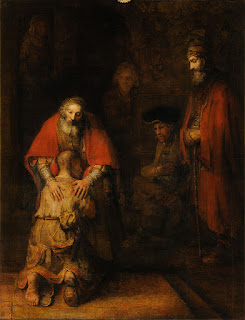 When my kids are behaving badly I jokingly inform my wife that they (our daughters) are hers.

Needless to say, she doesn’t think it is as funny as I do.

“They’re yours too,” she reminds me each time with a blissful tone in her voice and a stinging look in her eye. “They’re yours too.” At which point I realize that I cannot avoid doing something with them – about them – for them.

There’s a story in scripture traditionally labeled “The Prodigal Son.” It is the story of two sons. The elder son is faithful, obedient, hard working and patient. The younger son, well, not so much. He’s brash and demanding. He insists on his half of the inheritance far before it is due and then squanders it in dissolute living.

Penniless and poor, broke-down and broken he decides that he’d rather be a slave in his dad’s house than a beggar in a sty (literally). So, he heads for home hoping his dad will make him a servant and at the very least give him something to eat.

Much to his surprise, his father is overwhelmed with compassion upon seeing him. The son he believed to be dead was alive! The son he thought lost had been found. Before the younger brother can utter a word, his dad hugs him. Before he can explain why he did what he did or how sorry he felt, his dad forgave him. And then he threw him a party...

A party that put his older brother into a tizzy.

The elder son - angry with his father, jealous of his dad’s extravagant mercy - shouts,

“This son of yours has squandered your property… and you throw him a party?!”

This son of yours…

“My Son… we had to celebrate and be glad because
this brother of yours was dead and is alive, was lost and is found.”

This brother of yours…

There are times in life when we define others as just that… “other.” I jokingly label my kids as “my wife’s” when they’re bad, but there are other times when we perform the same practice and actually mean it. Instead of viewing one another as brothers and sisters, we develop an “us” and “them” mentality. Like the elder brother who defines his brother in relation to the father and not to himself, we distance ourselves from one another.

We develop party lines (literally). We divide humanity. We clan up and keep out. We believe that the more distance we keep from one another the safer we will be. Moreover, when it becomes apparent that help is needed or something has to be done, as long as we can view the situation as someone else’s problem and not our own, we can sleep at night.

There are likely a thousand takeaways from the story of the prodigal son, but one of them has got to be that those we perceive as distant sons are still our brothers.

While we shout, “This son of yours…”
God replies, “Do you mean this brother of yours?”

As my children are my own, you – each of you and all of you – are my brothers and sisters. Let us rejoice and celebrate like the prodigal family as we continue to find one another and forgive one another.

September 11, 2015
There is nothing quite like watching things “click” for a three-year-old.  My daughter, Molly, is in that stage of life where things are beginning to make sense. She’s starting to really understand cause and effect. She’s learning that she can build, play, create, catch, dance, and do a bunch of really awesome activities. So, I have this pretty cool front-row seat where I get to watch her discover and learn.  I’ve watched as Molly’s favorite refrain has gone from “what?” to “watch this.” I’ve seen confusion become clarity. I’ve witnessed skeptical eyes fill with joy. I’ve heard the proud laughter of a child who’s proud of herself. I’ve seen her jaw drop. I’ve seen her eyes fill with happy tears. I’ve watched a smile slowly creep across her face in astonishment. It is so cool when life clicks, when things start to make sense. Jesus has me thinking about that lately. I’ve been reading the Gospel of Mark and there seems to be a ton of confusion over who Jesus is and wh
Read more